Why is the periodic table periodic

Today, we're talking about the most important table ever.

Not the table where they signed the Declaration of Independence,

nor any table of contents, nor this table right here, nor the stone table of Aslan,

It is the periodic table of elements, a concise,

information-dense catalog of all of the different sorts of atoms in the universe.

Today I want to talk a little bit about the creation of this table,

which is, to be clear, one of the crowning achievements of human thought.

To start out, though, let's close our eyes and pretend.

Imagine you're in Siberia. And you're a thirteen-year-old boy.

And your father, who was a professor but had gone blind,

leaving your family of more than ten brothers and sisters destitute, has just died. I know, downer.

Your mom, to support the family, has re-opened an abandoned glassmaking factory in the small town where you live,

largely because she wants to make enough money to send you to school someday.

A year passes - the factory burns down.

But your mom, she sees your potential;

she knows that you have a keen scientific mind and will not see that squandered.

So, with your siblings out of the house and on their own, she packs up your belongings, straps them to a horse,

and with you in tow, rides 1200 miles through the Ural Mountains on horseback to a university in Moscow.

There, on your behalf, she pleads earnestly and effectively, and they reject you.

So together, you ride another 400 miles to St. Petersburg,

to the school where your father had graduated as a scientist,

and as luck, or extreme, insane, undeniably Russian persistence, would have it, they accept you,

and your saddle-worn butt, as a pupil. Your mother, having completed her mission, promptly dies.

If you're doing your imagining as I told you, you might feel a tremendous debt to your mother,

and a very deep desire to ensure that you achieve something on par with the sacrifices she made for you.

And maybe that's one reason why Dmitri Ivanovich Mendeleev became the crown jewel of Russian science,

and a theorist who revolutionized how we see the world.

Mendeleev spent a great deal of time in laboratories as a student, studying the burgeoning new field of chemistry.

He worked with all the elements that you could work with at the time,

and his knowledge gave him unique insights into their properties.

Those insights would come in handy.

and their atomic weights are mostly known as well.

So the simplest thing was just to sort them in order of their atomic weights.

But interestingly, you, because you're a cleverpants,

realized that the most significant relationships seem to have nothing to do with the atomic weight.

Lithium, sodium, potassium, and rubidium were all extremely prone to reacting with chlorine,

beryllium, magnesium, calcium, and strontium were all similar, but less reactive.

But with a quick inspection, you, and to be fair, a number of other chemists,

realize that there was a relationship between atomic weights, but it's periodic.

At the beginning of the list of elements, characteristics repeat every seven elements.

On the side here, we now know that it's every eight elements,

but in the 1860s, elements were studies based on their reactivity,

so the non-reactive noble gases had not yet been discovered, so the period occurred every

As the mass of the elements increases, the repetition starts to get a little less periodic,

although it's certainly still there; it just isn't perfect.

Some of your colleagues, they're saying: "Well, such is life."

It was perfect repetition early on, but later in the list it gets a little fuzzier.

But not you; you become obsessed. Obsessed with the perfection of the periodicity.

You write out the names and weights and properties of elements on cards;

you lay them across your desk, shuffle them, tear them to pieces in frustration, until one day, you realize:

that you're simply missing cards.

The numbers aren't working, not because there's something wrong with your ideas,

but because some elements simply haven't been discovered yet.

Armed with this insight, you insert gaps into the table, and things suddenly fall perfectly into place.

Seven-element periods for the first two rows, with hydrogen in its own category,

eighteen-element periods for the next two rows.

You're so certain that you predict the properties of these missing elements.

And when a French scientist comes along and says that he has, in fact, discovered one of them,

you argue with him, saying that you discovered it first in your mind.

And when you see his data, and it doesn't match yours,

you publish a paper saying his data for the new element he discovered is wrong.

That's how certain you are of yourself of this beautiful new theoretical framework you've created.

And you know what the really crazy thing is? You're right! That French guy's data was wrong!

You, never having examined the element he discovered, knew more about it than he did,

because you are Mendeleev, Master of the Elements.

Okay, we're done imagining for the episode; that was fun though.

Different groups Mendeleev had identified are a lot of the same groups that we study today.

Starting at the left, we have the soft, shiny, extremely reactive alkali metals,

so reactive, in fact, that they have to be stored in inert gases or oil, to prevent them

from reacting with the atmosphere.

Alkali metals want nothing more than to dump off an electron and form a positive ion, or cation.

And they're always jonesing to hook up with a hottie from the other side of the table.

So of course, seeing as they're so reactive, you don't find hunks of them lying around in nature;

instead, chemists must extract them from compounds containing them.

Next, you have the alkaline earth metals - reactive metals, but not as reactive as the alkali metals,

forming cations with two positive charges instead of just one.

The middle body area of the table is made up of a nice, solid rectangle of transition metals,

these are the metals you think of as metal, with iron, and nickel, and gold, and platinum.

The majority of elements are metals - they're fairly unreactive, great conductors of heat,

but more importantly for us, good conductors of electricity.

They're malleable, and can be bent and formed and hammered into sheets,

and they're extremely important in chemistry but overall surprisingly similar to each other.

On the far right, just over from the noble gases,

the halogens make up a set of extremely reactive gases that form negative ions, or anions,

with one negative charge, and love to react with the alkali and alkaline earth metals.

these guys don't end up as ions unless you take extreme action and start shooting other ions at them,

so generally a bit boring over here, though lots of interesting covalent organic chemistry

Down below, in their own little island, are the lanthanides and actinides,

metals that were largely undiscovered in Mendeleev's day

because they're so similar that it's next to impossible to separate them from each other.

And finally, on the far, far right, also undiscovered when Mendeleev built his chart,

Like a lot of other obsessive scientists, Mendeleev never thought he was done with his table,

so he held it back for quite a while, only publishing it as part of a new chemistry textbook

he was working on as a way to make some quick cash that he needed.

And, as with many other scientific revelations, there were a number of other people hot on this discovery's trail.

As many as six people published on the periodicity of elements at roughly the same time as Mendeleev,

but a few things set him apart.

He knew the data better than anyone else,

and had spent a ton of time working on a theory that many people thought was just an interesting little quirk.

And 2. he realized in a way no one else did that the idea of periodicity had far-reaching consequences.

It seems as if he had a deep belief in the cosmic importance of what he was doing,

but also he believed that organized religions were false paths to the unknowable nature of God.

I like to believe that he thought he saw some divine pattern in his tables,

and Mendeleev felt as if he was coming to know God in a way that no other man had.

To be clear, this is pure conjecture.

And as we now know, the periodicity of elements is a physical phenomenon.

It's a function of electrons, which are in some ways pretty dang peculiar, but certainly not at all mystical.

But we'll get to that peculiar physical reality in the next episode.

The periodic table that we know and love - I love it anyway - if a representation of reality;

a way of understanding and sorting the universe as it exists.

But that form of the table is not by any means set in stone;

indeed, a contemporary of Mendeleev envisioned the table set onto a screw, or cylinder,

with the elements wrapping around from one side to another.

While Mendeleev's table looks more like a map up on a wall,

de Chancourtois, a geologist, envisioned more of a globe.

Unfortunately for de Chancourtois, no publisher could figure out how to print his cylindrical 3D table,

and so he published his paper without a graphical representation of his Periodic Cylinder of the Elements,

and it was largely ignored.

I guess they didn't have paper craft back then.

I am a huge fan of this cut-and-tape model of the periodic table;

you can make your own - there's a link in the description -

that have various advantages over the one that we're all familiar with.

Our periodic table, as it stands, it really a little bit unhappy with itself, frankly;

the lanthanides and actinides really should be part of the table, but we separate them out,

because it's hard to fit that on a piece of paper; really, this is what it should look like.

And really, it would be best if it wrapped around into a circle,

so that fluorine, and neon, and sodium were all next to each other, instead of being on opposite sides of the map,

because they're just one proton away!

Mendeleev's contribution, nonetheless, is more powerful than at first it seemed.

Indeed, after Mendeleev's theories were published and accepted,

the overwhelming cry form the scientific community was "Why? Why? Why?"

And although Mendeleev was not himself concerned with this stuff,

he actually denied the existence of atoms, or indeed anything he couldn't see with his own eyes.

It turned out that the answer to the first "Why", was the electron.

That sneaky little electron; Mendeleev, if he'd been around to see their discovery, he would have hated them.

But you, you will have a healthy respect for them,

after you learn all about them on the next episode of Crash Course Chemistry.

Thank you for watching this episode of Crash Course Chemistry. If you were paying attention, you now know:

The terrible, beautiful, and wonderful story of Dmitri Mendeleev;

How he organized the elements into the periodic table;

Some of the basics of the relationships in that table;

Why Mendeleev stood out from his colleagues;

and how the table as we know it today could stand some improvement.

This episode of Crash Course Chemistry was written by myself,

filmed and directed by Caitlin Hofmeister, and edited by Nick Jenkins.

The script was edited by Blake de Pastino and Dr. Heiko Langner,

our sound designed is Michael Aranda, and Thought Café is our graphics team.

If you have any questions, please ask them in the comments below.

Thank you for learning with us, here in Crash Course Chemistry. 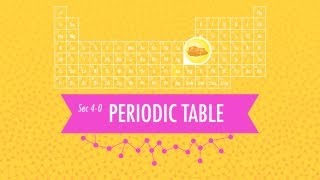 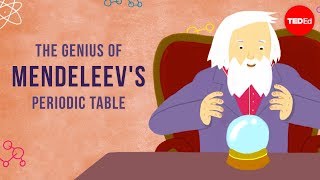 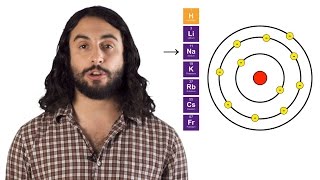 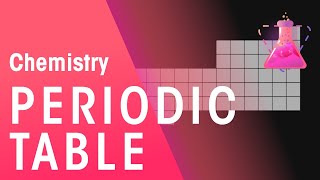 How Does The Periodic Table Work | Properties of Matter | Chemistry | FuseSchool 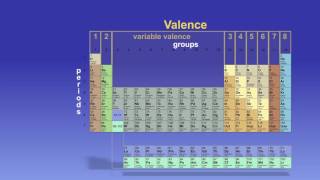 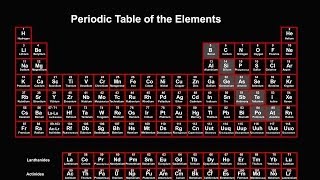 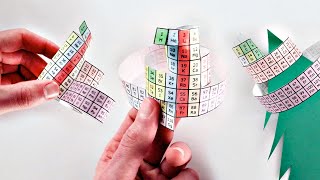 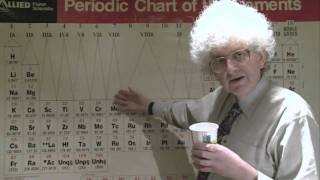 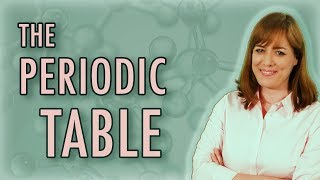 Chemistry: Introduction to the Periodic Table 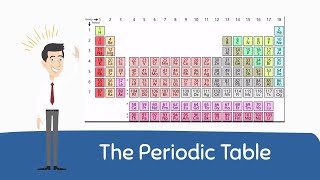