Why is the genetic code described as being universal

- You may have heard of this expression

that DNA codes for protein or for polypeptides,

which are the building blocks of protein.

And I want to show you in what language

DNA codes for polypeptides and how that language is read.

And so let's take a look at a chromosome.

you'd see that it's made up

of a tremendous amount of DNA

all coiled up and wound up together.

So we have DNA right here.

And we're gonna take a look

at a very very small segment of DNA

that I've kind of marked off with these lavender lines.

And that would be a gene.

And typically a gene codes for one polypeptide.

For one chain of amino acids.

And at some point this gene will undergo transcription.

And that means that an enzyme RNA polymerase

will come along and make a strand of mRNA

that's complimentary to one of the DNA strands.

And the DNA strand that it uses

to make the mRNA is called the template strand.

And the RNA polymerase doesn't pick

There are actually certain signals

that will tell the RNA polymerase

to pick one strand over the other.

As one DNA strand over the other as a template,

but we just won't get into those details right now.

So let's take a closer look at our DNA

and the mRNA that we just made off of that DNA

right here at the bottom left.

And so you can see that all the nucleotides

on the mRNA are complimentary to the nucloetides on the DNA

with the one caveat being that in RNA

we have uracil, or U instead of thymine.

So where ever you would think to put a T,

instead we put a U, which is uracil.

And the mRNA will eventually land up in the ribosome.

That's right here on the right.

And the ribosome will translate the mRNA.

And that means that it's going to kind of read it

and put together the corresponding polypeptide chain.

And so I just want to make it very clear

that the DNA does not end up in the ribosome.

It's only the mRNA strand that's right by the ribosome.

So every three nucleotides on the mRNA,

and actually also on the DNA, is called a codon.

And I'm just gonna circle all the codons on the mRNA.

seven codons on our mRNA.

And actually, also seven codons on our DNA.

And each codon is going to code for one amino acid.

And let's see how that's done.

So this chart that you're looking at,

which is hopefully not too complicated is the genetic code.

It's the language in which amino acids are coded for

and then put together into these

long polypeptide chains by the ribosome.

So in our upper right hand side,

I actually redrew our original DNA

and it's corresponding mRNA.

But remember it's the mRNA that's read and not the DNA.

You can actually see that by looking at the genetic code.

You can see that it's written in RNA language

So that kind of clues you in that

it's written in RNA language.

So let's actually look at the mRNA

that we have and let's read it.

Let's see what the ribosome will do

if it encountered this exact piece of RNA.

So we'll start with our first codon.

where it says first base in codon.

And then we look for the first base

in our codon, which is A.

And so we bracket that off

and we're going to be looking at that row.

where it says, second base in codon.

Now we find U, and here it is.

And then for the last base we look

at the right hand side of the chart

where it says, third base in codon.

And we're looking at the part that was bracketed off

by the row and column that we just looked at.

And we'll look for G.

We draw a line and we get the amino acid methionine.

So AUG codes for methionine.

And in fact, AUG doesn't just code for methionine,

it also tells the ribosome to start translation.

So we start with the left hand side and we look for G.

It's right over here.

Then we look at the top of the chart and we look for U.

So that is right over here.

in this particular area between those two lines.

And that gives us the amino acid Valine.

So GUU codes for Valine.

Let's look at our next codon, CCC.

So, at the left side we find C.

Bracket off that row.

Then we find C on top.

Bracket off that column.

And then find C on the right.

So CCC codes for proline.

Let's do the next one, AAG.

So we find A, bracket it off.

Then look for A on top.

And then look for G.

It's a little bit hard to see under that line.

But we get the amino acid lysine.

So AAG codes for lysine.

And the next one, GUU.

So in fact we already have the codon GUU.

The second codon was GUU.

So we're not gonna go over how to find it again.

Let's look at the next one, GUC.

And then U on top, so I'm gonna put the bracket here.

And then U, sorry C.

We have two different codons.

They're both coding for the amino acid valine.

Let's do our last codon, UAA.

So we find U and then A on top.

And then A on the right.

And we get stop.

So UAA does not code for amino acid.

But it tells the ribosome to stop translation.

So there we go.

It's made up of methionine, and then valine,

And there are a couple of important things

that you should keep in mind about the genetic code.

The first is that it's universal.

And what I mean by that is all organisms

all the way from bacteria, to plants, to animals,

all use the same genetic code to code

for their amino acids and polypeptide chains.

The second thing to keep in mind about

the genetic code is that it's degenerate.

Which is just a fancy way of saying redundant.

And that means that you can have more than one codon

that code for the same amino acid.

And we actually had an example

of this in our polypeptide chain.

We had two codons, GUU and GUC,

that are different, but they both code for valine.

So that's what we mean when we say

that the genetic code is degenerate or redundant.

And in fact, if you look at the chart you can see that

There are many codons that code for the same amino acid.

If you look right over here for example,

there are actually one, two, three, four, five, six

different codons that all code for the amino acid leucine.

is that although it's degenerate, it is not ambiguous.

And that means that each codon

can only code for one amino acid.

A codon can never code for two different amino acids.

So if you look at the upper left hand side for example,

let's look at the code UUU, that codes for phenylalanine.

So UUU always codes for phenylalanine.

It will never ever code for a different amino acid. 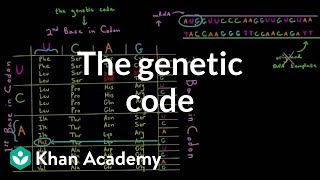 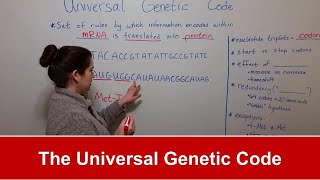 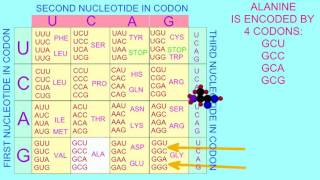 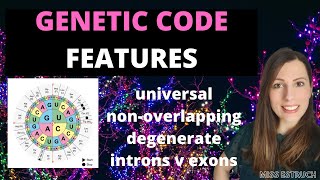 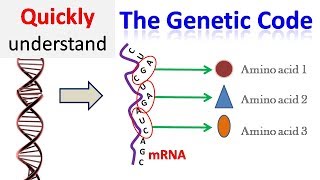 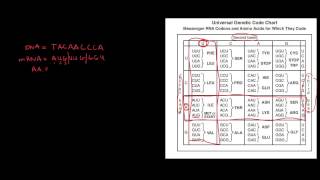 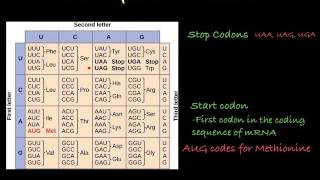 The Genetic Code- how to translate mRNA 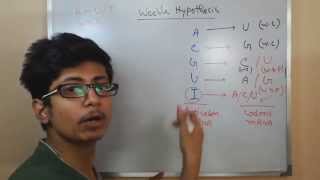 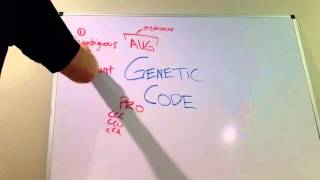 Four Features of the Genetic Code 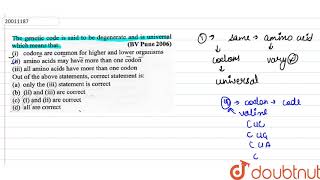 The genetic code is said to be degenerate and is universal which means that `:`