Why is the eucharist important

LIBBY: That was a yak.

KAI: Not as abominable, just as hairy.

LIBBY: We made it.

at the source of the Indus River.

KAI: That explains nothing.

It's where the Christian faith begins

and gives meaning to everything Christians do.

It's the source and summit of the faith.

KAI: Wait, are you telling me we just hiked 30 miles up

KAI: Hairy monsters, either way, in the freezing cold,

just so you can make a pun?

LIBBY: Yes, but not just a pun.

This is a physical inhabitation of metaphorical reality.

KAI: I cannot believe you.

LIBBY: That's what a lot of the disciples said.

KAI: I'm going back down.

I'll see you back in the studio.

LIBBY: What is that?

LIBBY: All right, well, can we just start?

KAI: Look, from here to the end of the episode,

every time there's an opportunity for a bad pun,

I'm going to make it.

LIBBY: OK, whatever you need.

KAI: Dough, that's what I knead.

LIBBY: Anyway, as we were saying,

according to the Catechism of the Catholic Church,

the Eucharist, or Holy Communion,

is the source and summit of the Christian life.

KAI: Yeah, and if that sounds like a pretty big claim, it is.

What the Church means is that the Eucharist

is where the Faith comes from.

It's also the summit for Christians,

because it's where everything they are,

and everything they do in their lives,

LIBBY: That is big and bears some explanation.

KAI: I will grin and bear that that explanation, pun two.

LIBBY: In all seriousness, today we will discuss

what the Eucharist is, where it comes from,

and what it means to us today.

I won't sully it with a pun.

I'll be a good host.

LIBBY: Let's start with what we mean

when we say the source of the Faith.

KAI: For that, we need to understand the Last Supper.

LIBBY: And not just why everyone was sitting

on one side of the table.

KAI: It was Passover, and Jesus,

knowing He was about to be captured and killed,

with His closest friends, the Apostles.

Do you know where the term Passover came from?

LIBBY: Passover is a holy feast,

important to our Jewish brothers and sisters even today.

It observes the time that God delivered

the Jewish nation from slavery in Egypt.

It's a memorial meal.

KAI: When I hear the word memorial, I think of Memorial Day,

you know, where you remember those who went before you,

or calling something to mind and actively remembering it.

LIBBY: In Jewish tradition, it is so much more than that.

The purpose is not just to have thoughts about it,

but to make the reality of a moment in the past

into a reality now in the present.

KAI: When they celebrate the Passover,

they believe that they're actually participating in

the Passover from slavery to freedom.

LIBBY: Even the menu for the Passover is filled with meaning.

KAI: They had a menu for people about to travel:

unleavened bread, herbs, and a lamb that was sacrificed.

LIBBY: And the blood of that lamb was spread on the doorposts

and lintel, and death passed over every door

They also had to eat the flesh of the lamb

as part of the meal.

KAI: Catholics believe that the food of the new Passover,

called the Eucharist, is Jesus,

the Lamb of God who died on the cross.

His sacrifice saves His followers from slavery, too,

the slavery of death and sin that keeps them

from being free to live life to the fullest.

LIBBY: So at the Passover celebration we call the Last Supper,

and important to this memorial meal.

KAI: From all the foods on the table, Jesus takes the bread.

Bread is an interesting choice.

It takes a community to make it.

You can't pick bread off of a tree.

You need someone to till the soil,

someone to plant the seed, someone to harvest it,

someone to mill it into flour, someone to bake it,

and someone to serve it.

Jesus, who has lived and taught and forgiven

and healed in community, and will soon die

for the sake of the community, takes the bread and says,

"Take this and eat.

This is my body."

LIBBY: When we say body, we usually mean our physical body.

LIBBY: But if you go back to the word used for body,

it's the Greek word soma, which means the totality

of a person, who they truly are.

Jesus takes the bread, and says, "This is my soma,"

the totality of who I am.

Then He says, "Take and eat.

Do this in memory of me."

Make this real in your time.

LIBBY: And then Jesus takes a cup filled with wine,

part of the body's biochemical system.

They saw blood as the life-force of a person, their energy.

LIBBY: So Jesus is saying, "Take my life-force into you.

Take my energy into you."

But a lot of people might ask, when Jesus says,

"This is my body and my blood,"

is that just a metaphor?

For putting cows in.

LIBBY: No, it's not a metaphor, everyone.

KAI: In John's Gospel, he says to His followers,

"My flesh is true food and my blood is true drink.

Unless you eat the flesh of the Son of Man

and drink His blood, you have no life in you."

LIBBY: Right, and when He said that, people started...

Well, they freaked out.

we should poke our eye out if it sins.

LIBBY: They knew He meant this statement differently.

They said, "This is a hard saying.

Who can accept it?"

KAI: Honestly, it is a hard saying.

LIBBY: But, Catholics know from Scripture, and experience,

That's why they talk about the real presence of Jesus.

KAI: Because the body, blood, soul, and divinity of Jesus,

the Lamb of God, is really

and fully present in the Sacrament of Eucharist,

or Holy Communion, offered at Mass.

LIBBY: As you may remember from other episodes,

the Church describes a sacrament as the outward visible sign

of an invisible grace.

is the bread and wine.

KAI: And the invisible grace is

the real presence of Jesus,

who is present in all ways, except His outward, human form.

He's really there to set us free, to fix what's broken,

to pour His love on us, and save us from death.

KAI: Not just eternal death, but the small deaths of our lives,

our struggles, our disappointments.

LIBBY: And that's why Catholics receiving

KAI: Amen doesn't just mean, yes, or, I do believe.

It means that you believe it and will make it real

in your own life.

A source of faith, the Eucharist, that will lead you

to the summit of faith, a way of being alive

that's energized by the life-force of God Himself.

LIBBY: No wonder we call it a celebration.

Eucharist, isn't that Greek for thanksgiving?

To sum up, there was the Passover and then the Last Supper.

There was the blood of the lamb, and then the body,

blood, soul, and divinity, of Jesus, the Lamb of God.

LIBBY: The Sacrament of Eucharist, a sacrifice

and memorial meal that leads us from slavery to freedom,

that transforms us and brings us home to our real selves,

sending us into the world passionate to make a difference.

LIBBY: All right guys, that's it for us.

Thank you for joining us, and we'll see you next time. 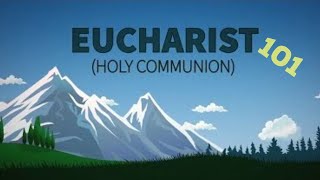 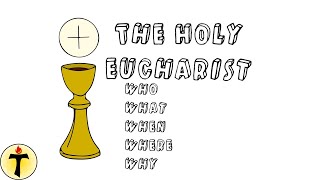 What is the Holy Eucharist? 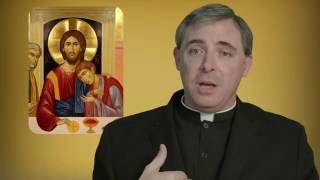 HOLY COMMUNION - WHY IS IT IMPORTANT? - Catholic Precept #3 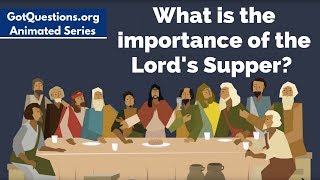 What is the importance of the Lord's supper / Christian Communion? 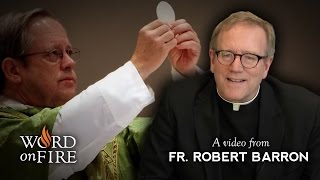 Bishop Barron on the Real Presence of Christ in the Eucharist 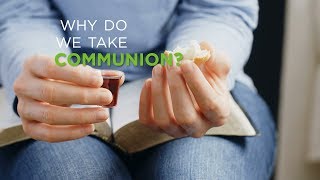 Why Do We Take Communion? 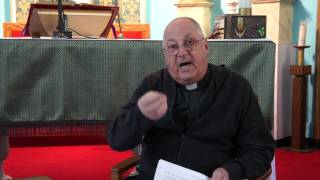 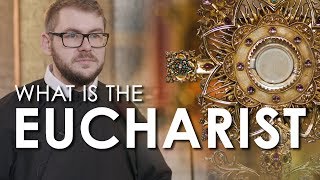 What is the Eucharist ? 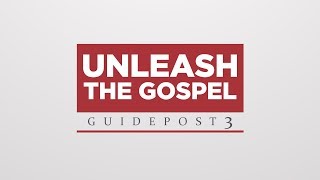 Why is the Eucharist so important to evangelization? 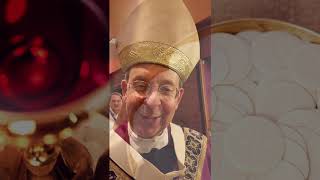 WHY IS THE EUCHARIST IMPORTANT TO YOU?